To Look for Beauty 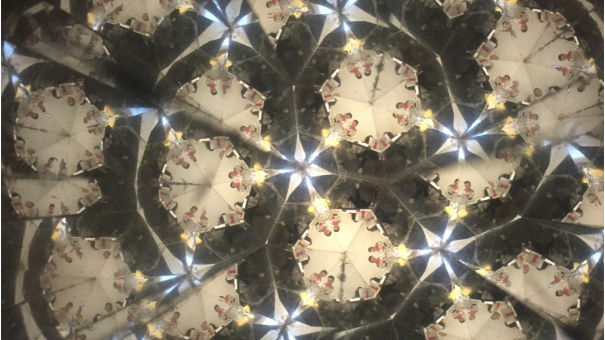 If you ask a hundred people, what does the world look like, you probably will get a general idea that the world has a blue sky, and warm sunshine; that you can hear people talking around coffee shops, and children playing in the park.  However if you ask individuals the same question, you probably will hear toys, sweets, balloons and McDonalds from a child; coffee, newspaper and the park from an old man; work, money,  or a home loan and children from a parent.

This is how people see the world, each seeing from a different perspective. Everyone has his or her own perception of the world, and perception is how people receive their illumination. Each individual  learns through eyes, ears, and experiences. However, curiosity always drives people to experience different things and that is why a Kaleidoscope is so attractive to people.

By coincidence, a friend told me her former roommate left her an old kaleidoscope as a gift, that was something her roommate really cherished, because she brought it from her hometown, and it felt like home to her. The first time I saw it, it did not seem attractive at all. It was yellow, with a scratched picture of several Japanese alien superheroes. The colors had already started to fade; a couple of dirty spots scattered around on it. The only thing that made me feel good about it was the cylinder shape, which perfectly fit in my hand. On one end of the kaleidoscope, it had an arc-shaped clear glass globe which was like a fortune telling crystal ball, impelling me to discover what the world inside looked like. There was a metal ring covered the end of the cylinder which looked like a guard that protected the glass globe. On the other side,was another metal piece shaped like an ancient Chinese copper coin, round and thin with a small hole in the middle. I could not tell how old it was,  but it reminded me of the coins that my grandmother has, the metal had been oxidized, the color was fading out on the edges.

The kaleidoscope looks just like the telescope that a crippled captain with a parrot on his shoulder would use. It was as if a child found an antique from his grandfather’s old suitcase, which may have a treasure map inside, As I looked through it, I could feel the metal part, as cold as a marble, so ruthless, having no feelings. However, the moment I looked into the tube, unlike a typical kaleidoscope that with several mirrors containing loose, colorful objects, this one had been filled with see through glasses that instead of looking at images, one can look at the real world. The world was breaking into countless parts, created an illusion that makes you feel dizzy, as if you just consumed a bottle of vodka. On the other side, the world inside was so clear that one could perfectly recognize the edges, the colors and the shapes. It was like seeing through a diamond. I was surprised to see how the world changed just through a thin layer of angled glasses.

This word “kaleidoscope” is derived from the Ancient Greek word καλός (kalos) which means “beautiful”, εἶδος (eidos) which means “being seen” and σκοπέω (skopeō) which means “to look for” (Encyclopedia Britannica-is this a reference). Together, “kaleidoscope” can be understood as “to look for the beauty”. What is the beauty? Can we consider discovery to be beauty? Can we consider illumination to be beauty? The answers are definitely yes. From the moment one looks into the kaleidoscope, they are engaging with a new environment that they could never imagine.  One may be amazed by the scene that appears, be surprised by the effect it creates, be inspired by the unexpected experience it brings. Therefore, do not judge a thing by its appearance; take advantage of every opportunity  to be illuminated.